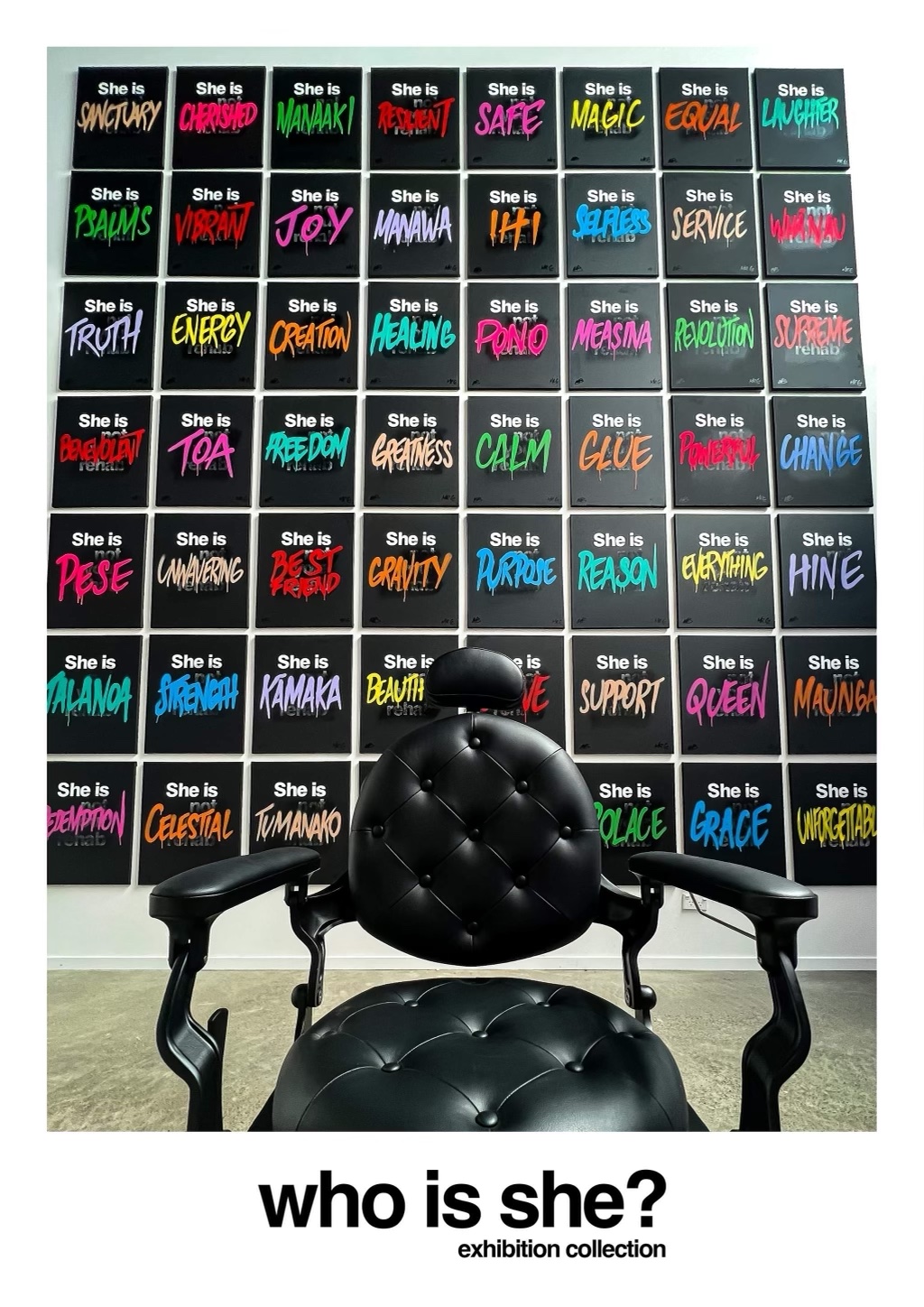 She Is Not Your Rehab called for global submissions from men who are prepared to answer this question;

If SHE is NOT your rehab, then WHO IS SHE?

The submission process was open online and via selected prisons, the team accepting written submissions of a positive word a man wanted to use to describe a woman in his life with a 100 word accompanying paragraph about who they dedicating their word to and why they chose their word.

Mataio, Sarah and their team prepped 100 canvases in a matte black painted background with Mataio individually stencilling the She Is Not Your Rehab painted lettering onto each of the 100 canvases.

Mr G arrives in Ōtautahi, Christchurch and paints the 100 words from the submissions along with he and Matt both hand-signing each canvas.

A large signature piece of the exhibition was digitally created with Mr G painting over the top, to be installed in a public area outside the gallery. SHE IS TAPU. Tapu; a Polynesian traditional concept denoting something holy or sacred. The concept exists in many societies, including traditional Māori, Samoan, Kiribati, Rapanui, Tahitian, Hawaiian, and Tongan cultures.

Each of the 100 piece Who is she? collection was taken and hung in the original kept areas of the old Addington prison; A cell. A solitary confinement cell. The main staircase. The corridors. A back stairwell.

Photographer Felix Wu photographed each of the 100 pieces individually, focusing on the message of the art and the movement of the prisoner in this confined space. This is representative of how much the message is needed in this environment, as every year in NZ, around 7,000 people start a Corrections-managed sentence for which family violence is the lead offence, and one-fifth of people on a Corrections sentence at any given time will have a family violence conviction associated with their sentence. Over half of men and a third of women currently in New Zealand prisons have either current and/or previous convictions for family violence. 53% of all prisoners have experienced family violence victimisation in their lifetime, with 48% experiencing family violence as children.

The entire creative process is documented by videographer Brandon Te Moananui, to share selected stories behind the submissions to support and give context to the exhibition.

Here we include the story of 17 year twins; Tanemahuta and Teakaraupo Pakeha-Heke who witnessed horrific domestic violence as children. Together, they sing and share their own story regularly in hui all around the country in hopes of reducing domestic violence. Their Mother was a victim of domestic violence and passed away when the twins were 5 years old. The word Tapu is submitted in honour of her.

We also meet former Black Power senior gang member Jordon Rangitoheriri; Father of Moko Rangitoheriri, the toddler who in 2015 was beaten to death in Taupo by his caregivers at the time. Jordon shares his own regrets and submits the word Strength in honour of his wife Lariah, a woman instrumental to supporting his own healing journey in becoming the father to his children now, that he never had.

The page you requested could not be found. Try refining your search, or use the navigation above to locate the post.

X
My cart
Your cart is empty.